When Derrick Nix (’94) was considering life after high school, Bob Bierie (’65), the head coach of the Loras football team at the time, was the first college coach to recruit the Chicago-area athlete. Nix played in the Chicago Catholic League and had offers to play at Division I schools, but he wavered when making his final decision. Coach Bierie’s persistence helped him make up his mind, but it wasn’t the only reason he chose Loras.

“The atmosphere that I saw here provided a great deal of tranquility for me as an inner city kid,” he said.

That tranquility also came with a difficult transition period.

Coming to a place like this was a unique structure, not seeing many people who looked like me. Being involved and having a strong dedication to make it through the process without much help from someone who could relate to my background was extremely difficult.” 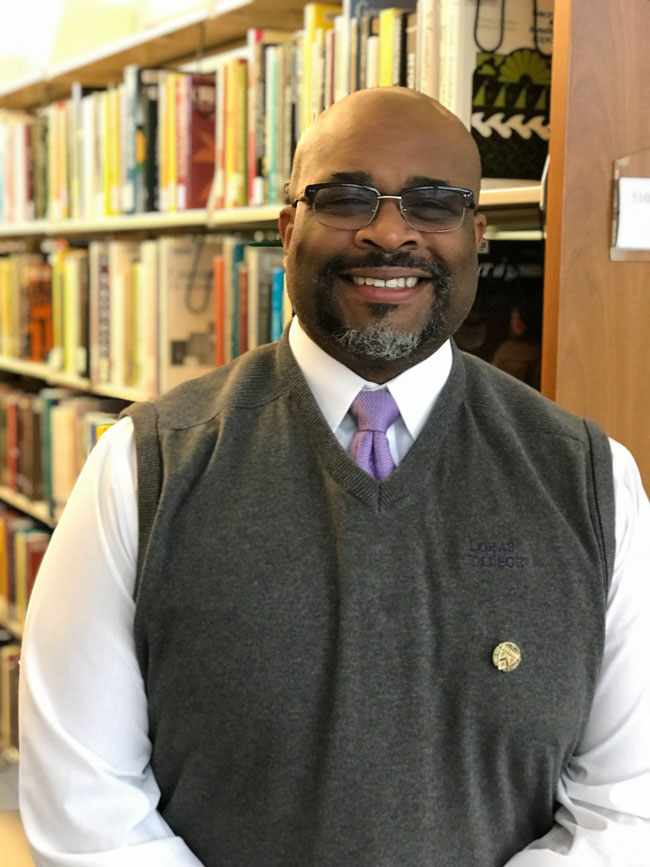 Adding to the difficult transition was increased racial tension around Dubuque at the same time. In 1991, Dr. Jerome Greer became the first African American principal in Dubuque when he was hired to oversee Irving Elementary School. In a town that already had racial issues simmering under the surface, Dr. Greer’s arrival set off a series of events in the city, including multiple cross burnings. Racial tensions remained even after Dr. Greer left Dubuque in 1994 to become director of human resources for the public schools in Peoria, Ill.

“It was very challenging just being out in the community. At times, I think the campus was the safe haven. Even though we had some people to reach out to, when you are here to learn how to be successful out in the community and the community surrounding you is not a desirable place to be, suddenly all of these roadblocks appear.”

In an effort to not only get comfortable on campus but to ensure personal safety, Nix recalls the importance of the Black Student Union on campus to helping him and other black students connect and get involved.

“We went everywhere together, in part for protection because students would be harassed when they went into town. When we would go out to a movie or to dinner, there would be 12 of us going. We didn’t want anyone getting hurt. Rocks were being thrown at students, and we weren’t here for that. We left the inner city because of that.”

Nix not only got involved with the Black Student Union but worked to connect himself with members of both the Loras community and the Dubuque community at-large.

I approached it that I should be as involved as possible. I made it a point to know everyone on campus because I was in the process of wanting to see change occur. I was on the diversity committee board for selecting police officers with the city. I worked with the Dubuque Civil Rights Commission. Those are areas I got involved with in order to help my sanity and try to make a change in an area that had a huge need. It was more of an internal process to understand what was happening and being able to work together and achieve a higher goal.”

“We did see progression in the community, and that started with conversations we had with the chief of police and Dr. Greer. Things almost had no choice but to move forward, but it did happen. As far as the student body, it was strong my entire time here.”

Since his graduation, Nix has maintained a strong connection with his alma mater. He is a member of the National Alumni Board and mentors Loras students every year. He also meets with students regularly to connect with them and offer support moving forward. He was also the keynote speaker at the Senior Dinner this past May.

“I have always been connected with Loras from day one. It is important that connections are made
because then we can see where we started with the first alumni to actually understand the process and be able to build communities in order to foster  greater success for students of diverse backgrounds.

“Those connections and the building of a community are vital building blocks to building on the College’s ability to not only appeal to more students of color, but to ensure graduates are even better prepared for their careers.

“Students are here for a reason. They chose Loras over everywhere else. So how do we make them feel like they are able to succeed and want to stay here? Loras has always been able to foster and deliver students into our society as productive citizens. Working environments are changing dramatically and becoming more culturally diverse from all perspectives. In order for our students to continue to be successful not only on campus but also in the real world as productive citizens, having a diverse background of students and staff will only further our excellence in the world of good citizens.”

“We want to be able to maintain our excellence, but if we don’t incorporate diversity in students and faculty, we will fall behind. We have the capabilities. We need to build on that excellence.”